6th November 2021 - Northwich Victoria 7 v 1 Ashton Athletic - Up and out and a quick walk around Victoria Park in Latchford and then to the tattooists to get the belfry inked.  90 minutes later I had 'Fungalised' daubed along the side of the nut and me and my missus were sat in a lovely local cafe having a warm drink and some toasted treats. The rain began to fall and a last minute change of plan sent us to the ground of Northwich Victoria where we could have a sit down out of the falling moisture.  We were welcomed by several fine local supporters and were well and truly settled in by the time 3.00pm came.  I refuse to reveal our predictions as they weren't even close but, I reckon come full time, very few others were near the mark either.

The game began after a 2 minutes silence for fallen heroes.  A poppy wreath was laid by a veteran who proudly saluted and marched off - thank you sir.

The first advances came from a frisky Ashton pack with a long ball nutted wide.  Another shot followed soon after, but was weaker than the wrist of Paul Merson after a heavy session on the one-armed bandits.  Again the guest pack came, No 11 (Joshua Nicholson) was out wide with the home mitter spied off his line  A shot was launched from distance, the ball rose, fell and bulged meshings - what a way to get the scoresheet blemished.

Now, the dozing Vic-Men had to push and push they did only to come up against a rock solid defensive wall.  Ashton progressed, won a corner that the wind helped to waste and then, the home lads broke like a rampant fart from a fat-man's overstuffed anus.  No 10 (Bradley Lynch) went on the chase, the visiting No 1 (James Aspinall), came forth and then pedalled back.  A shot came and was struck with sugar sweet accuracy.  The keeper was beat, the ball kissed the inside of the upright (ooh sexy) and flew into the netting - back to all square we were.

Now the Vics were on it.  A long cross ensued which was nutted down to No 9 (Carl Grimshaw) who used good muscle to hold the ball, turn and propel towards goal.  The keeper sprawled and saved well, with Ashton taking a deep breath and scurrying away.  No 7 (Ethan Brough) was out wide, a low placement pass found No 9 (Gabriel Ellis) who released a punt towards the bottom corner - by crikey lad that were close.

The game continued. Northwich Victoria sprung the traps with No 11 (Matthew Birchall) darting, cutting in and putting in a shot that quivered the timber.  Grimshaw followed up, the mittman saved, Grimshaw regained possession and this time thumped home - Ashton looked mighty stunned to say the least.  Within mere moments the Vics were marauding forth again with No 7 (Ryan Winder) galloping like a man with the shits on his way to a targeted karsi.  The basin of success looked ready to be filled but the possessor of the ball unselfishly laid off and allowed Bradley to make for the third splash of success.  Cracking stuff or should that be, cacking stuff?

A free-kick was awarded next to the rampant home 'erberts.  A good ball was posted with the keeper doing well to tip behind.  The ball was placed at the angle, Lynch gave it a good hoof with plenty of bend, a mystery wind got up at the last and the ball went straight into the onion bag - talk about a bonus.  Two questions immediately arose  - was the ball fitted with a remote control device or was the scorer in league with nefarious dark forces - either way, they all count.

The home lads were now running the show and eager to get a few more goals.  Ashton Athletic were in disarray and looking to stop the leakage - a pair of footballing Tena Pads was the best I could offer. Northwich came on, eyed the jugular with No 3 (Joel Bembo-Leta) setting off on a lusty run.  The dashing player passed to Grimshaw who walloped first time with his unfavoured foot, this time the keeper could take a breather. Seconds later a ball over the top saw Birchall sneak in again, once more the keeper was untroubled as a defensive bod produced a high class tackle to smother the danger.  Within the twitch of a Tadpole's todge Birchall was wriggling away for the second time.  A shot came, the outcome was wide as was another effort soon after with the same player receiving from Winder, but again not zoned in to the vital area. 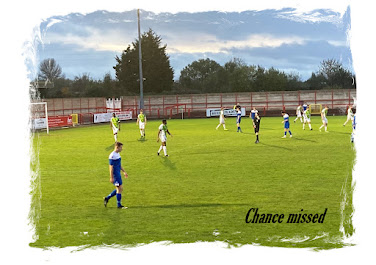 Onwards and a Vic's corner brought panic in the AA box, survival was had, but only just.  The visitors began to push, but lost possession with No 2 (Roman Allen) collecting and then releasing a sumptuous pass that cut the opposition in half allowing Birchall to collect and bury.  I think we could say that was that.

Before the break more action came in the Ashton box with the keeper tipping the ball up, blocking a shot and then Grimshaw having a dig and winning an angled boot.  The corner came, no joy was had, a repeat kick followed with the globe finding its way onto the line and awaiting a killer touch.  The ball was hoofed away, No 5 (Rudy Misambo) returned with an attempt on goal which was way off the mark - phew - half done, thank buggery for that.

We stayed put for the break, chatted to some fine and welcoming locals and assessed what a quality bout of football we had just seen albeit aided by a travelling pack severely out of sorts.  I suspected the half time talk would include phrases such 'you useless bastard', 'what the fuck was that' and 'get your arses into gear, out there and make sure you don't concede another'.  I trembled at the thought and hoped the guests could come out re-invigorated.

The teams came out!  Guess what?  With minutes another goal was had by the coasting Vics who pressed the opposition and fed Lynch who only had the keeper to beat.  The ball was slotted home, 6 - 1 - this was a game in danger boasting a score-line of capricious leanings.

From here, for much of the second period, Northwich Victoria played it cool, passed with patience and forced their opponents to chase shadows.  The Athletic did have a rare sortie forth with Nicholson weaving in and No 10 (Lewis Boyd) having a pop that the keeper had to push behind for a corner.  The free ball in was shite, it about summed up the team's day.

Ashton, to give them credit, worked away and tried to get a consolation, but The Vics were concrete at the back with Allen and Misambo key components.  The game fell a trifle flat, a few semi-chances came and went, a couple of subs were made and the host No 8 (Luke Sephton) sent in a side-footed bender that just wouldn't stay below the crossbar.  The game coughed and spluttered and was a contrasting image of the opening 45 minutes.  During the final throes the six-goal unit pressed with patience and forced the trailing pack to chase and lunge without much success.  Eventually the substitute No 12 (Chad Whyte) received and walloped home, much to the delight of the supporting ranks.

The last gasps came and went, The Athletic had a final thrust that saw a shot easily saved and that was indeed that.  A convincing home win with the Man of the Match choice going to 4 goal star, Northwich Victoria's No 10 (Bradley Lynch),  A fine work rate, a knowledge of where to find space and of course a quartet of goals - what can one add?

Cold, a trifle tired but pleased with the day thus far, we two peeps pissed off homeward vowing that Wincham Park will be visited several times a season from now on.

FINAL THOUGHT - Ashton Athletic were abysmal today, but rest assured, this won't be the case for the rest of the season.  With a little work on holding the ball, using the full playing area and making sure all areas are disciplined they will hopefully sneak a few points here and there and get themselves moving in the right direction.  Days like this happen, the key is now dusting down as quick as possible, getting the fitness levels up to level 'max' and going forth into the next few matches determined to up the ante - watch this space, I certainly will be.  The Vics have not had things all their own way this year and have been something of a mixed bag, they seem to be getting their act together... at last.  I think they played with good earnest desire today and although being allowed to have most of their own way they remained disciplined and not overly greedy.  From here they now need to build and make sure this is a springboard to ongoing success.  This is a tough old league though so matters won't be easy therefore my final advice is 'strap up yer conkers, pull yer socks up, make sure you have yer winter vests on and go ruddy get em' - we shall sithee mighty soon.

Posted by Non League/Nature Punker at 09:34

Non League/Nature Punker
A non-league and nature blogger done by a busy enthusiast who has many hands in many pots. The key is putting back, doing for the love of it and hopefully encouraging enthusiasm and action in others. A simple DIY ethos.